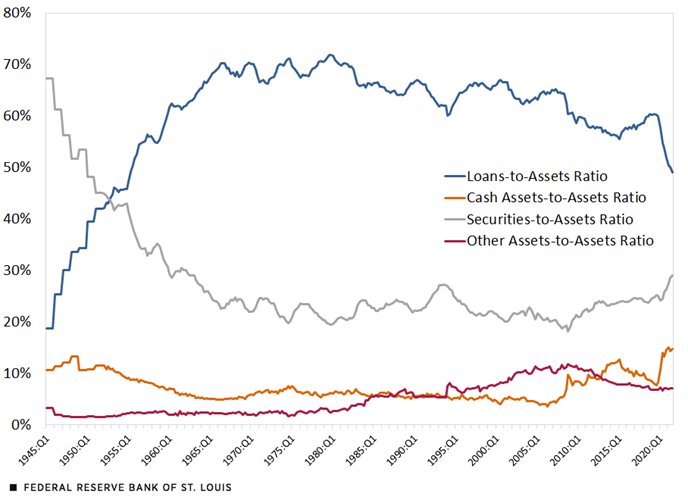 The Federal Reserve’s acquisition of $4.4 trillion of bonds since February 2020 more than doubled the size of its balance sheet. Meanwhile, commercial banks’ balance sheets expanded by about $4.2 trillion in aggregate. Despite similar expansions, links between the Fed’s and the banking system’s balance sheets are complex.

This blog post, the first in a two-part series, describes how banks have accommodated the very large involuntary increase in their Fed reserve balances that corresponds to Fed asset purchases—first, on the asset side and, in a second post, on the liability side. In this post, I argue that Fed asset purchases did not cause banks to “de-risk” the asset side of their balance sheets. Instead, banks reacted to the lending environment they faced.

In response to the COVID‑19 shock in early 2020, the Federal Reserve restarted its large-scale asset purchase (LSAP) program, first operated in 2009. In the two years ending Dec. 29, 2021, the Fed increased reserve balances by $4.62 trillion.1 This resulted in more than a doubling of the Fed’s balance sheet. The securities share of Federal Reserve regional banks’ consolidated assets increased slightly, from 90.1% to 94.4%.

Large-scale Fed asset purchases do not dictate the size or composition of banks’ balance sheets, but they impose a significant constraint on bank assets. When the Fed purchases Treasury or agency securities from a dealer bank, it pays for the purchase by crediting the bank’s Federal Reserve deposit account in the amount of the purchase. The bank can then use those funds to buy other assets if it chooses to do so, which moves the reserve balances to other banks. But unless and until the Fed removes reserve balances from the banking system, by selling bonds to a dealer bank, those balances will remain on the consolidated balance sheet of the entire banking system.2 In other words, banks can and do adjust other asset categories in response to Fed reserve creation.

Changes in the Composition of Commercial Banks’ Assets: December 2019 to December 2021

SOURCES: Federal Reserve Board H.8 Release: Assets and Liabilities of Commercial Banks in the United States, and author’s calculations.

In the financial analysis of an individual bank, a low or falling ratio of loans to assets would suggest the bank is not doing well. This is because loans are typically the highest yielding and most profitable bank asset type. The bank’s net interest margin might be contracting, problem loans might be discouraging new lending, net income could be falling, and the bank might be struggling to maintain adequate capital strength. It could even become the takeover target of a stronger bank. In other words, a very low or rapidly declining loans-to-assets ratio typically is interpreted as a very bad signal for an individual bank.

While it’s true that net interest margins at most banks have declined recently, few of the other problems typically associated with a declining loans-to-assets ratio are evident in aggregate data:

The first two years of large-scale asset purchases after the financial crisis (through year-end 2010) resulted in an increase in Fed securities holdings of $1.66 trillion, but the overall size of the Fed’s balance sheet changed little. This is because several other large crisis-related asset categories on the Fed’s balance sheet declined while securities holdings increased. This might make the immediate postcrisis period less comparable to the present situation.

Indeed, as the figure below shows, bank loans changed little during the initial phase of large-scale asset purchases, although holdings of securities and cash assets increased at the expense of other assets.

Changes in the Composition of Commercial Banks’ Assets: The Great Recession and Recovery

SOURCES: Federal Reserve Board H.8 Release: Assets and Liabilities of Commercial Banks in the United States, and author’s calculations.

The Fed continued to purchase assets in large amounts after 2010, in what came to be known as “QE2” and “QE3.”4 In the four years ending Dec. 31, 2014, the Fed’s securities holdings and total factors supplying reserve funds increased an almost identical $2.7 trillion. As this figure shows, bank loans (and other assets) decreased notably during the second period as securities and cash assets attained larger asset shares. This change in asset composition—away from riskier and less-liquid assets toward less risky and more-liquid assets—closely resembles the pattern seen in the COVID‑19 period.

Taking a longer view, the declining share of loans in banks’ assets associated with recent episodes of Federal Reserve large-scale asset purchases continues a trend visible for several decades before the financial crisis. The aggregate loans-to-assets ratio peaked at 71.8% in late 1979, as the figure below shows. The ratio had declined modestly, on balance, to 64.4% as of June 30, 2008. The subsequent, more rapid decline to 49.1%, as of Sept. 30, 2021, accelerated during the two eras of Fed asset purchases (2009-14 and 2020-21), as described above.

The counterpart to the declining loan share of bank assets until the financial crisis (from 1979 until mid-2008) was an increase in other assets. Securities and cash assets, meanwhile, remained relatively stable in the four decades that ended in 2008.

Why Have Banks Chosen Safer and More-Liquid Assets during Periods of Large-Scale Fed Asset Purchases?

The Federal Reserve’s balance sheet has increased by $7.8 trillion since Sept. 10, 2008, just before the acute phase of the financial crisis began; banks’ assets have increased by $10.2 trillion. Despite the similar change, the composition of banks’ assets is not dictated directly by the Fed’s creation of reserves to support its asset purchases.

In the aggregate, banks have been shifting their assets away from loans and other risky assets, and toward securities and cash assets, for a long time. This pattern accelerated during periods of large-scale Fed asset purchases. Banks thereby became safer and more liquid but potentially less profitable.

Why did banks de-risk their balance sheets especially when the Fed was engaging in large-scale asset purchases? A direct causal link (banks passively accepting higher reserve balances with no offsetting adjustments) is implausible because banks could have increased lending much more if they had wanted to maintain previous balance-sheet ratios. The increase in banks’ securities holdings also reflects intentional bank portfolio choices beyond the Fed’s direct influence.

1 This quantity is the two-year change in the item “total factors supplying reserve funds” in the Fed’s H.4.1 release. Historical data are available on FRED.

2 Strictly speaking, banks and other financial institutions with reserve accounts, like government-sponsored enterprises, as well as the Treasury, may convert reserve balances into other Federal Reserve liabilities, such as reverse repurchase agreements or currency. The point remains that only the Federal Reserve can increase or reduce its total liabilities, and it does so primarily through open-market operations settled in banks’ reserve accounts.

3 Two years ending Dec. 29, 2021. There are minor differences in the two Federal Reserve data sets used in this article in how securities and other assets are classified. In the H.8 release, other assets are somewhat larger and securities somewhat smaller than in the FAOTUS release.